The 802.3 Ethernet standard specifies that a network implement the CSMA/CD
access control method.

2. What are two services provided by the OSI network layer? (Choose two.)

3. How do hosts ensure that their packets are directed to the correct network destination?

Hosts must maintain their own local routing table to ensure that network layer
packets are directed to the correct destination network. This local table typically contains a route
to the loopback interface, a route to the network that the host is connected to, and a local default
route, which represents the route that packets must take to reach all remote network addresses.4.

127.0.0.1 is the local loopback address on any TCP/IP network device. By pinging
this address, the technician is verifying the TCP/IP protocol stack on that particular device.

There are two rules for IPv6 address compression. Rule 1: leading zeros in any
hextet can be removed. Rule 2: contiguous hextets of all zeros can be compressed to a double
colon. Rule two can only be applied once.

6. Which function or operation is performed by the LLC sublayer?

A /27 mask is the same as 255.255.255.224. This leaves 5 host bits. With 5 host
bits, 32 IP addresses are possible, but one address represents the subnet number and one address
represents the broadcast address. Thus, 30 addresses can then be used to assign to network
devices.

8. Refer to the exhibit. Consider the IP address configuration shown from PC1. What is a description of the default gateway address? 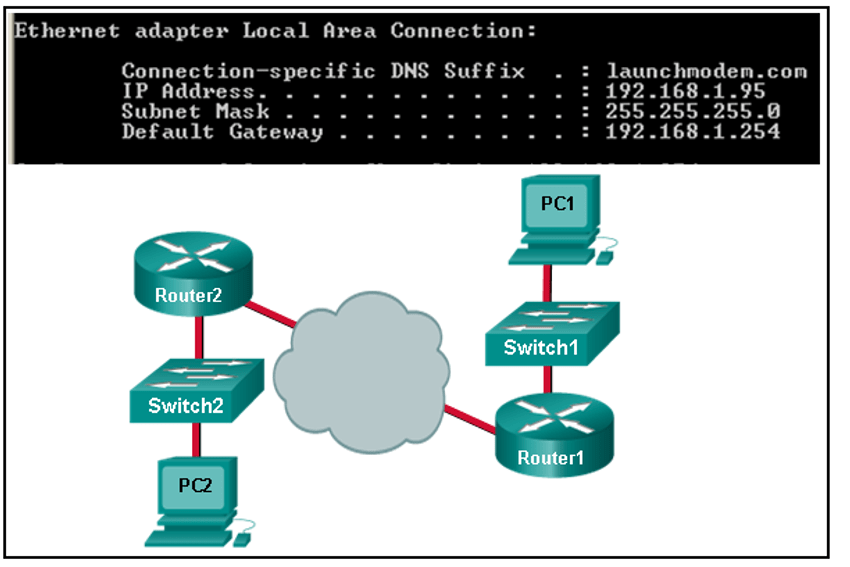 The default gateway is used to route packets destined for remote networks. The
default gateway IP address is the address of the first Layer 3 device (the router interface) that
connects to the same network.

9. What is the command netstat -r used for?

The command netstat -r displays the host routing table to verify the routes and
costs that a computer uses to communicate to certain networks.

An IPv6 address is made up of 128 bits that are represented as eight blocks of four
hexadecimal digits that are called hextets. Because each hexadecimal digit represents four bits, each hextet represents 16 bits. The /64 network prefix indicates that the first 64 bits, or first four hextets, represent the network portion of the address. Because there are 128 bits in an IPv6
address, this leaves the last 64 bits, or last four hextets, to represent the host identifier. The value for the last four hextets is 0607:1234:aa10:ba01.

11. Which statement describes a MAC address?

The Media Access Control (MAC) address is a physical address assigned to each
Ethernet NIC by manufacturers. It is 48-bits in length. The MAC address is used to identify the
source and destination on a local Ethernet network. It cannot be routed to remote networks.

12. Why does a Layer 3 device perform the ANDing process on a destination IP address and subnet mask?

ANDing allows us to identify the network address from the IP address and the
network mask.

13. What are two characteristics of IP? (Choose two)

The Internet Protocol (IP) is a connectionless, best effort protocol. This means that
IP requires no end-to-end connection nor does it guarantee delivery of packets. IP is also media independent,  which means it operates independently of the network media carrying the packets.